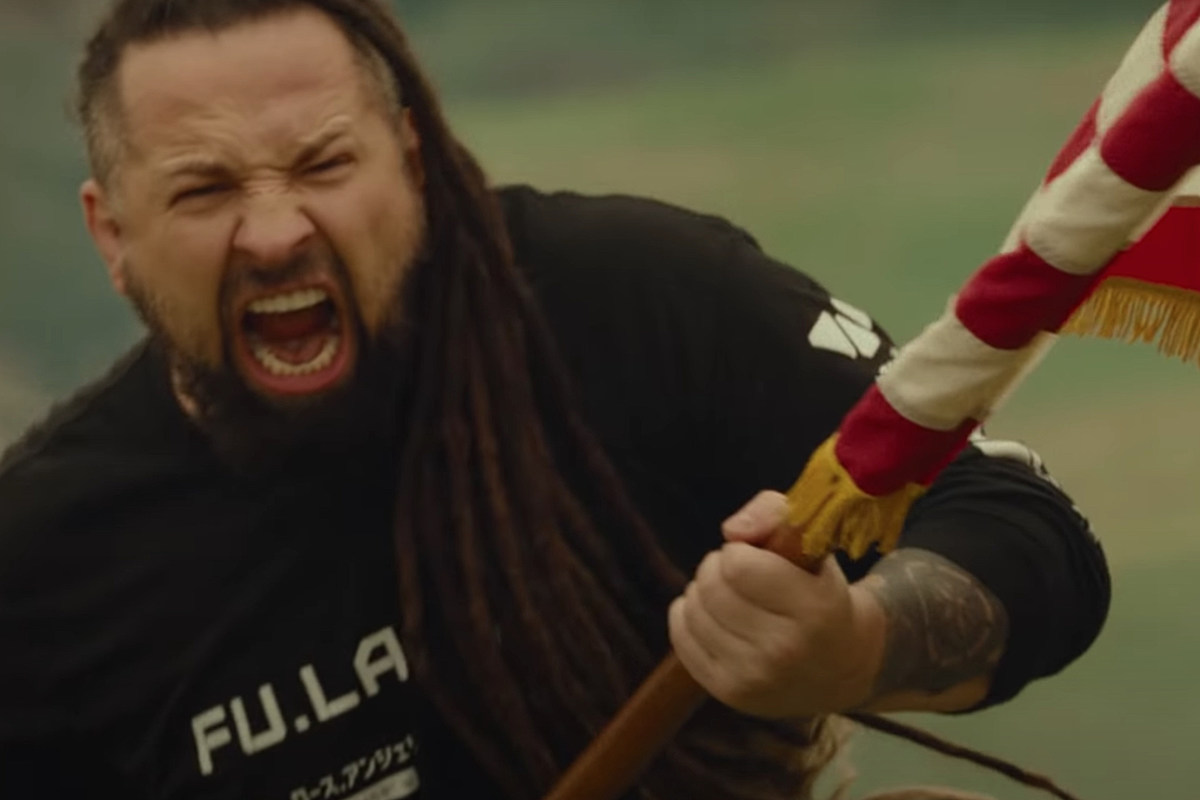 Yesterday (Oct. 16), Five Finger Death Punch released a music video for “Living the Dream.” The video was rife with social commentary, some of which has been met with backlash for the way people who wear a mask — to mitigate the spread of a pandemic contagion) are compliant under a Communist system of government — or one that resembles such. Guitarist Zoltan Bathory has issued a lengthy statement, clarifying the intent behind the video, denying it bears an anti-mask message.

In his statement, Bathory alleges news media outlets forewent explaining what his message in the “Living the Dream” video was in favor of intentionally misleading readers for capital gain. He urges that among the metaphors present in the video (toilet paper hoarding zombies, overweight superheroes with ill-advised diet habits), the scenes regarding the “compliance” in mask wearing should be viewed as fictional as well.

“The scene in question is not about the masks… it’s NOT an Anti-Mask message,” wrote Bathory, who also noted Five Finger Death Punch currently sell… a variety of face masks to help mitigate the spread of the coronavirus, as recommended by the CDC (Centers for Disease Control) and White House coronavirus advisor and Director of the National Institute of Allergy and Infectious Diseases, Dr. Fauci.

In this scene, a female political figure bears a pin marking her as “exempt” as she applauds those compliant in mask-wearing, awarding them with a “compliance” pin that also features a series of Communist hammer and sickle symbols.

Bathory, an immigrant who grew up under totalitarian rule, stressed his concern for certain parallels he is currently seeing in America. “The mask segments are about hypocrisy on the highest level,” he clarified. “When the rules are made for you but those who made them are exempt. Pretty much the standard in all dictatorships and totalitarian regimes (I had the displeasure of growing up in one) hence the reference.”

Read the complete statement below.

As much as some *news sites* used “anti-mask” as a clickbait title (And I must applaud the capitalist in them or I myself would be a hypocrite) Let’s make this crystal clear: In a fictional story, Amongst shopping cart zombies, Tide Pod eating fat superheroes and all the other metaphors, why would anyone think the mask scene isn’t one.
The scene in question is not about the masks… it’s NOT an Anti-Mask message…
… in fact you can go to FiveFingerDeathPunch.com
Right now and buy some cool ones…
If I must explain this ‍♂️ The whole video is in the frame work of fiction, a dystopian nightmare of one of the founding fathers – right before he signs the constitution.
Just as I prefaced it: “We as artists, have a unique opportunity to portray and ridicule the absurd to prevent it from *becoming* reality.
The mask segments are about hypocrisy on the highest level. When the rules are made for you but those who made them are exempt. Pretty much the standard in all dictatorships and totalitarian regimes (I had the displeasure of growing up in one) hence the reference.
I often say, ask us!!! The immigrants… the Cubans, the Venezuelans, the North Koreans, anyone from the former Soviet block… Talk to us and we will tell you …. WE were lucky, because we had a place to escape to. We are fortunate that we could come here…. but If America is gone, where will you go?
We immigrants also remember how our freedom slipped away, how our rights were ripped from us, how we were kept under the thumb and in fear of our own governments. So maybe, just maybe… we have valuable experience we can tell you about, we can forewarn you of the things we have seen before.
So We the people must do everything in our power to stay free as a society. We must prevent the rise of tyranny in all shapes and forms, we must resist the would be dictators and the totalitarian ideals. This is what the founding fathers worried about and tried to prevent by creating the constitution. Believe it. America is a miracle, and I LOVE this country… and I will never shut up about it
Anyway – not anti mask – and If you reduced this entire video to that scene and missed the metaphor behind it … Well… the good news is – It is STILL America so you have the right to have and even print your own opinion.

The Most Performed Songs by 50 of Rock’s Biggest Bands