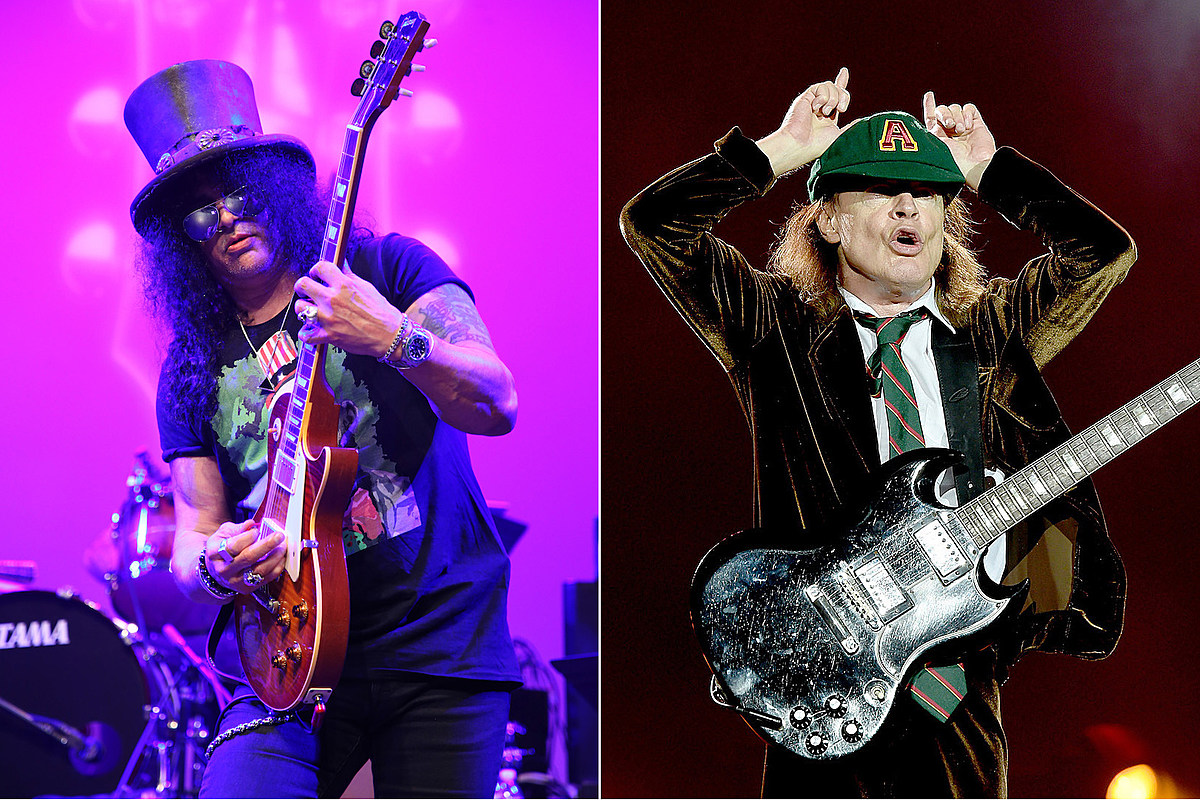 AC/DC‘s latest effort Power Up has truly been a lifesaver for rock fans in these dark times. One big supporter of the album is this guy named Slash, and he says he’s had the album on repeat in his car for quite a bit.

“I obviously have a long history with AC/DC, and then Axl [Rose] was singing with them for a minute when Brian [Johnson] was out, so we got reacquainted during that period,” the guitar legend told Consequence of Sound.

He went on to commend the rockers for their ability to carry on following both Johnson’s hearing issues and then the death of Malcolm Young in 2017.

“The fact that Angus [Young] and company would survive that and keep it going, in the spirit of probably what Malcolm would have done, was great. I just love those guys because as far as rock ‘n’ roll is concerned, they just are driven.”

Needless to say, the GN’R guitarist is a big fan of Power Up.

“Then, on top of it, they make such a great fucking record at this point in the game,” he praised. “It’s a really inspired album. I’ve had it in the car for the last couple of days and it’s probably gonna sit there for a while. It’s exciting for me.” 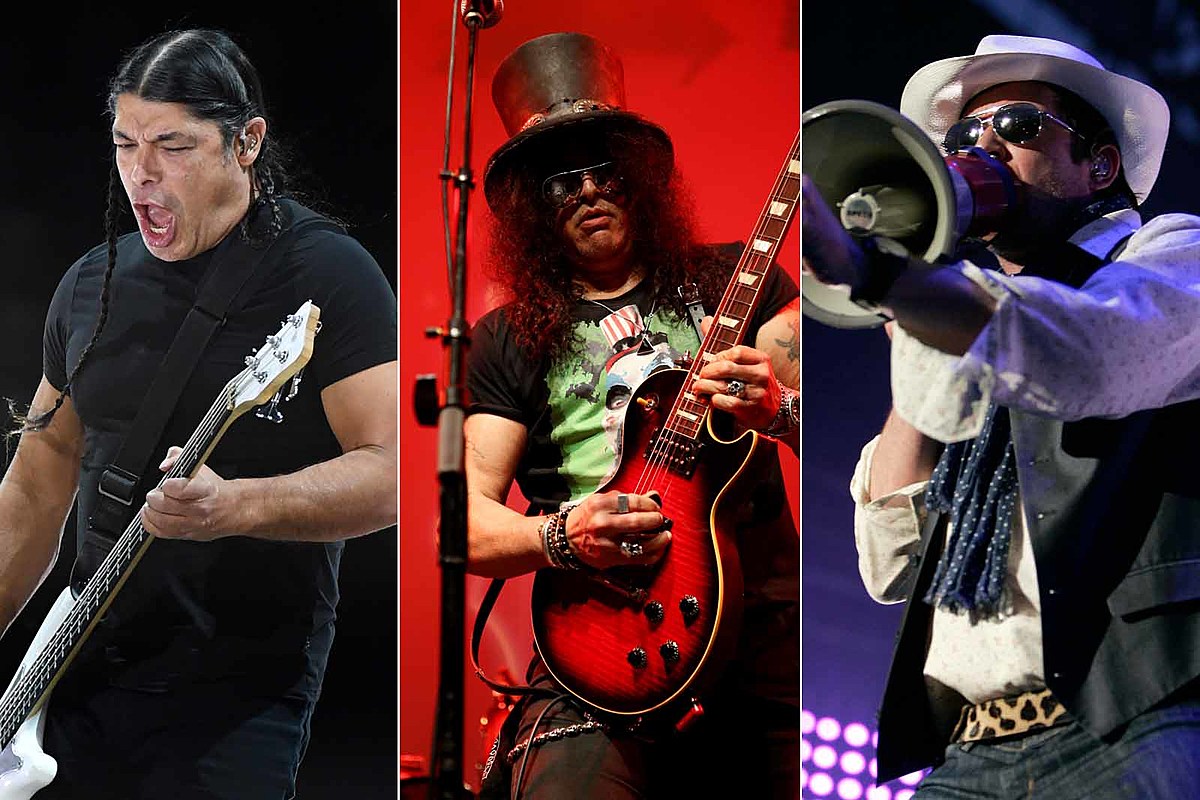 The sons of Slash, Metallica‘s Robert Trujillo and Scott Weiland from Stone Temple Pilots have formed Suspect208. Their debut single, “Long Awaited,” can be heard below.

Suspect208’s drummer London Hudson, 18-year old son of the Guns N’ Roses guitarist, announced the group on Instagram by posting a picture of himself, Tye Trujillo and Noah Weiland along with guitarist Niko Tsangaris. “Me and the boys from @suspect208_ released our first single ‘Long Awaited,'” he wrote. “Out everywhere now! Link in bio, check it out, we got more shit coming soon! #208shit.”

Weiland, who is a few days shy of his 20th birthday, is the oldest of the bunch. Yet three of the band’s members have quite a bit of high-profile experience.

Childhood friends Hudson and Tsangaris have been working together for about four years in Classless Act, and even opened up for Slash at the Hollywood Palladium in 2019. Three years ago, Tye Trujillo, at the age of 12, found himself filling in for Korn bassist Fieldy during a tour of South America. Those dates concluded with Robert joining his son onstage for “Blind.”

“It’s a beautiful thing, ’cause he’s still a 12-year-old and he still acts wild and crazy, as a 12-year-old should,” the elder Trujillo said about his son. “But when it comes to music, he’s very focused. And with Korn, it’s funny, because I haven’t shown him anything at all for the Korn stuff — I’ve been too busy and I’ve been out of town a lot — and he’s taking this opportunity very serious.” 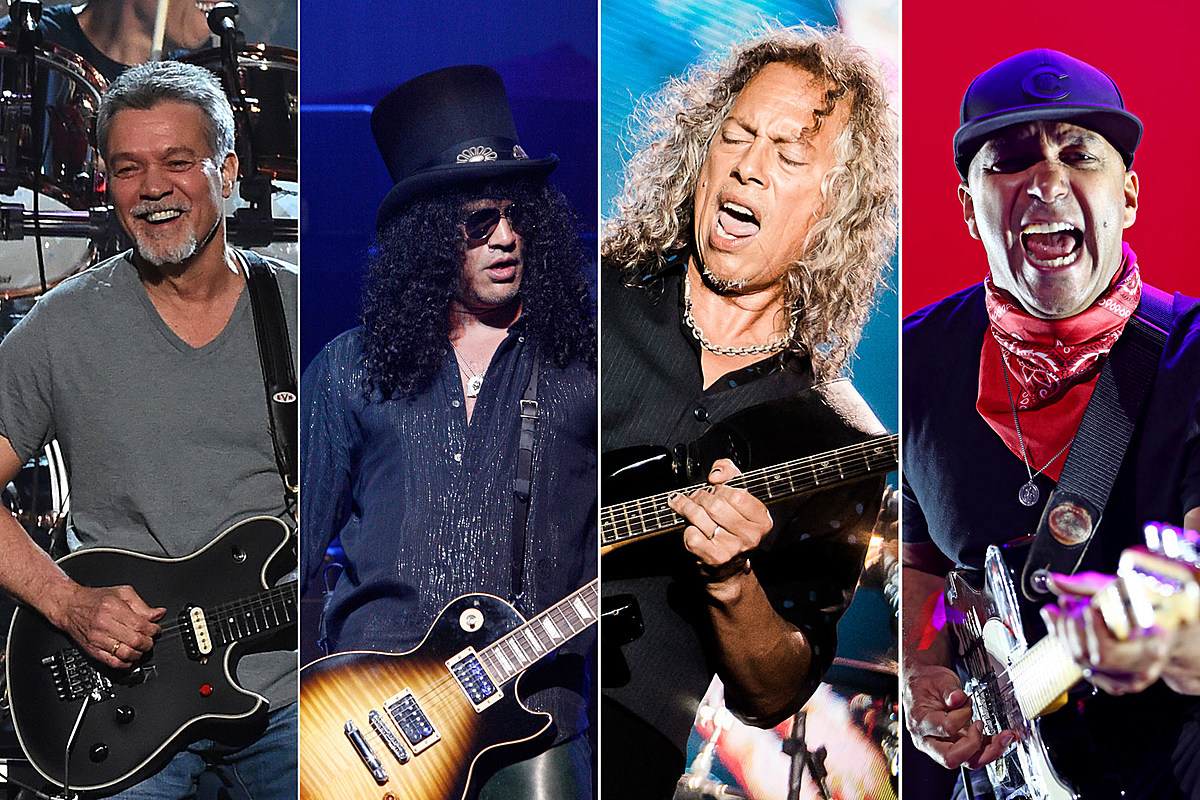 While the Rock and Roll Hall of Fame ceremony was set up to celebrate the new inductees, there was a very special segment for one of the already existing Rock Hall members, the late Eddie Van Halen.

The guitar hero inspired a generation of players and you need look no further than some of his peers who paid tribute to the iconic musician.

Kirk Hammett added, “Eddie Van Halen was amazing. Not since Jimi Hendrix had there been a guitar player that had so much impact and was so inspiring to me. He just explored the most simplest thing, a harmonic on a string, and brought it into a realm of technique that nobody even thought was possible. He was just like from a different planet.”

Tom Morello concluded, “Eddie Van Halen was the Mozart of our generation. He had the kind of talent that maybe comes around once a century. Eddie Van Halen inspired me to practice 20,000 hours to try to get within a hundred miles of his inspired mastery of the electric guitar.” 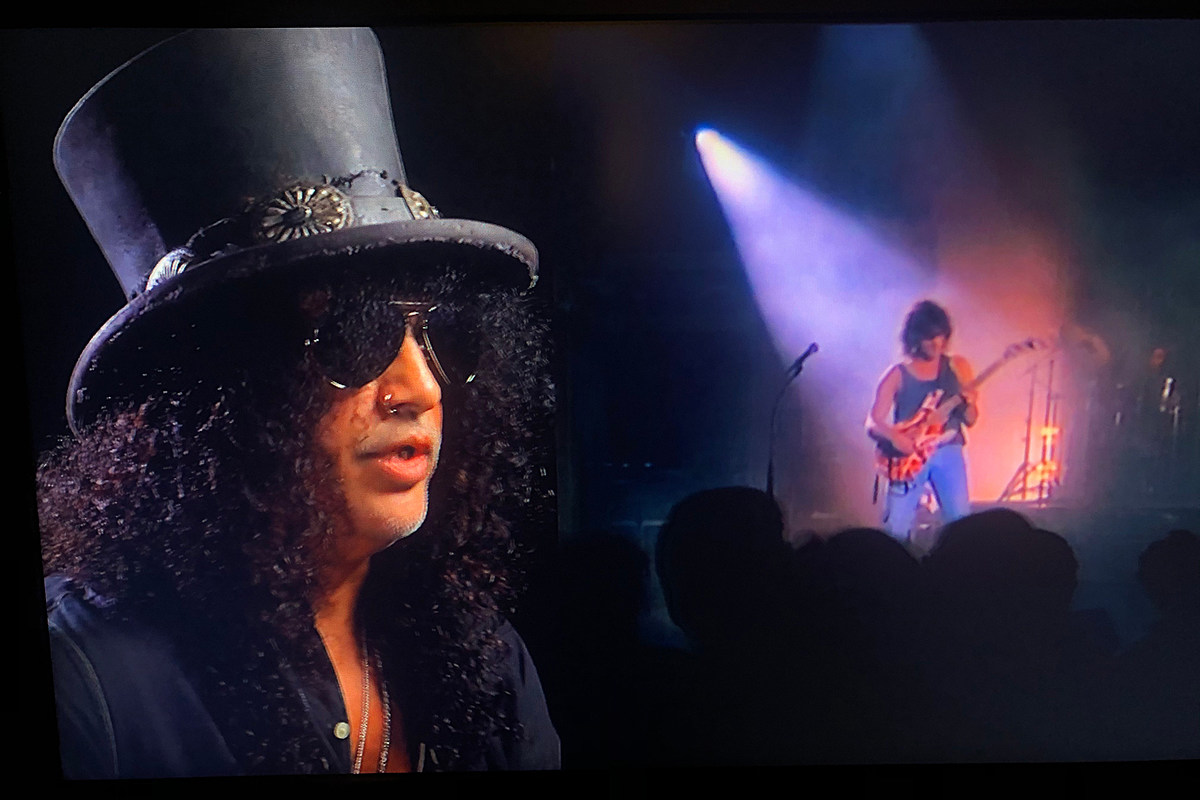 Three of music’s greatest guitarists helped honor the memory of Eddie Van Halen at the Rock and Roll Hall of Fame induction ceremony.

“Eddie Van Halen was a tremendously gifted musician,” declared Guns N’ Roses’ Slash. “His style and his sound were completely unique to him. He had a massive impact on guitar playing. I don’t think there’s anybody that’s picked up the guitar since 1978 that hasn’t been touched in some way by Eddie Van Halen’s influence. I’m going to miss his playing and I’m going to miss him as a friend.”

Kirk Hammett echoed similar sentiments, describing Eddie as “amazing” while recalling the late rocker’s lasting influence. “Not since Jimi Hendrix had there been a guitar player that had so much impact, and was so inspiring to me,” the Metallica guitarist explained. “He just explored the most simplest thing – a harmonic on his string – and brought it into this realm of technique that no-one even thought was possible. He was just, like, from a different planet.”

Tom Morello, known for his years in Rage Against the Machine and Audioslave, described Van Halen as “the Mozart of our generation.” “He had the kind of talent that maybe comes around once a century. Eddie Van Halen inspired me to play 20,000 hours, to try to get within 100 miles of his inspired mastery of the electric guitar.”

News of a tribute to Van Halen began spreading over a week ago, as the Rock and Roll Hall of Fame prepared for the most unique induction ceremony in its history. The 2020 event was originally scheduled to take place in May, but was postponed due to the ongoing COVID-19 pandemic. Instead, a virtual event featuring pre-recorded segments was broadcast as part of an HBO special.

As part of the in memoriam segment, Slash, Hammett and Morello’s powerful words of admiration aired while archival footage of Eddie Van Halen was shown on screen. The legendary guitarist, who died on Oct. 6 following a battle with cancer, was inducted into the Hall along with the other members of Van Halen in 2007. 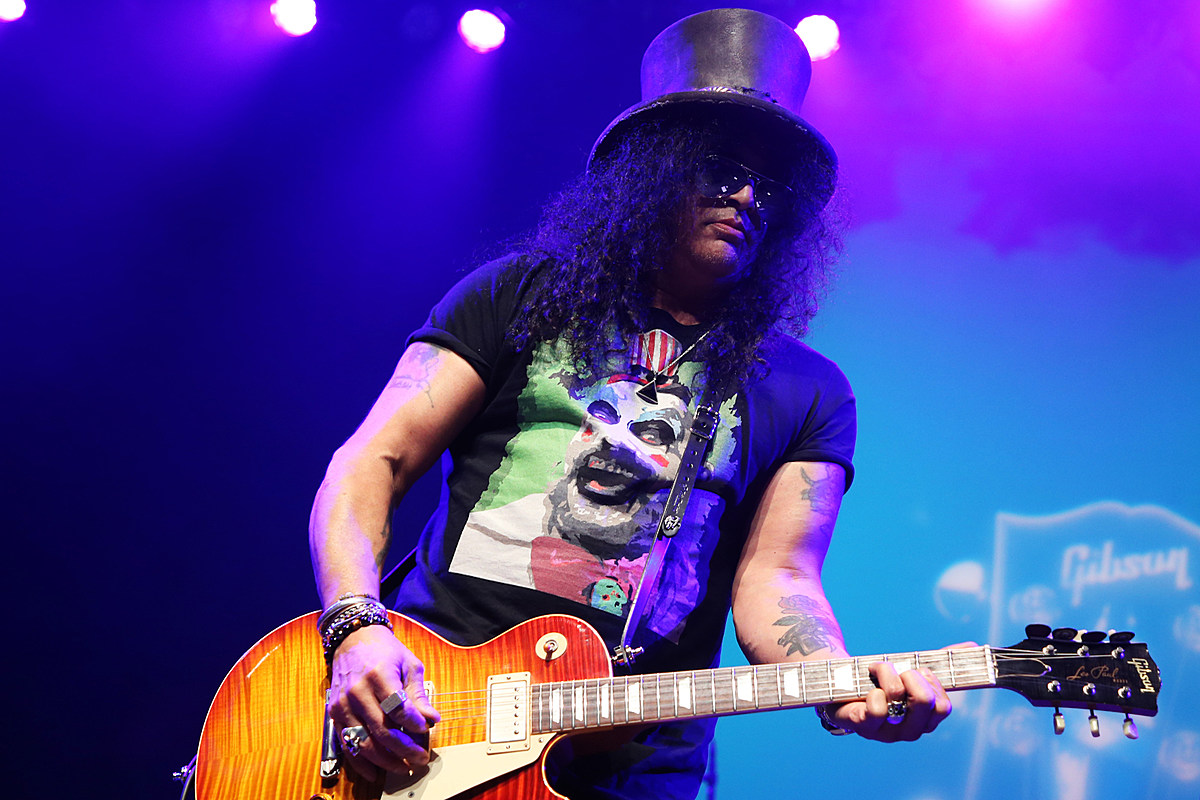 Slash has released a cover of the song “Where Do I Begin?,” the theme from the 1970 movie Love Story.

The Guns N’ Roses guitarist’s rendition was created as a tribute to his close friend Robert Evans, the former Paramount studio executive who died last year and oversaw the making of Love Story.

“@Slash, Mr. Evans great friend & everyone’s Guitar Hero, went to the studio and recorded this new version of the Love Story Movie theme song to honor him today,” noted a message on an Instagram page dedicated to Evans’ memory. “We love you #Slash & we miss you Mr. Evans.”

For his cover, Slash used both acoustic and electric guitars, creating a soaring combination of interlaced sounds on this instrumental track. You can listen to Slash’s rendition below.

Remembered as one of the era’s iconic cinematic themes, “Where Do I Begin?” helped earn composer Francis Lai the Golden Globe and Academy Award for Best Score in 1971.

Slash previously made “Speak Softly Love,” the theme from The Godfather – another film with which Evans was associated – part of his live performances for more than a decade.

The guitarist has had a busy 2020, even as the coronavirus disrupted plans for GNR to tour. Slash recently made a guest appearance on Rage Against the Machine guitarist Tom Morello’s new EP and contributed to the Sixx:A.M. song “Maybe It’s Time,” which was released in August. Slash has also reportedly been working with Guns N’ Roses on new material, though there are still no details about its release.