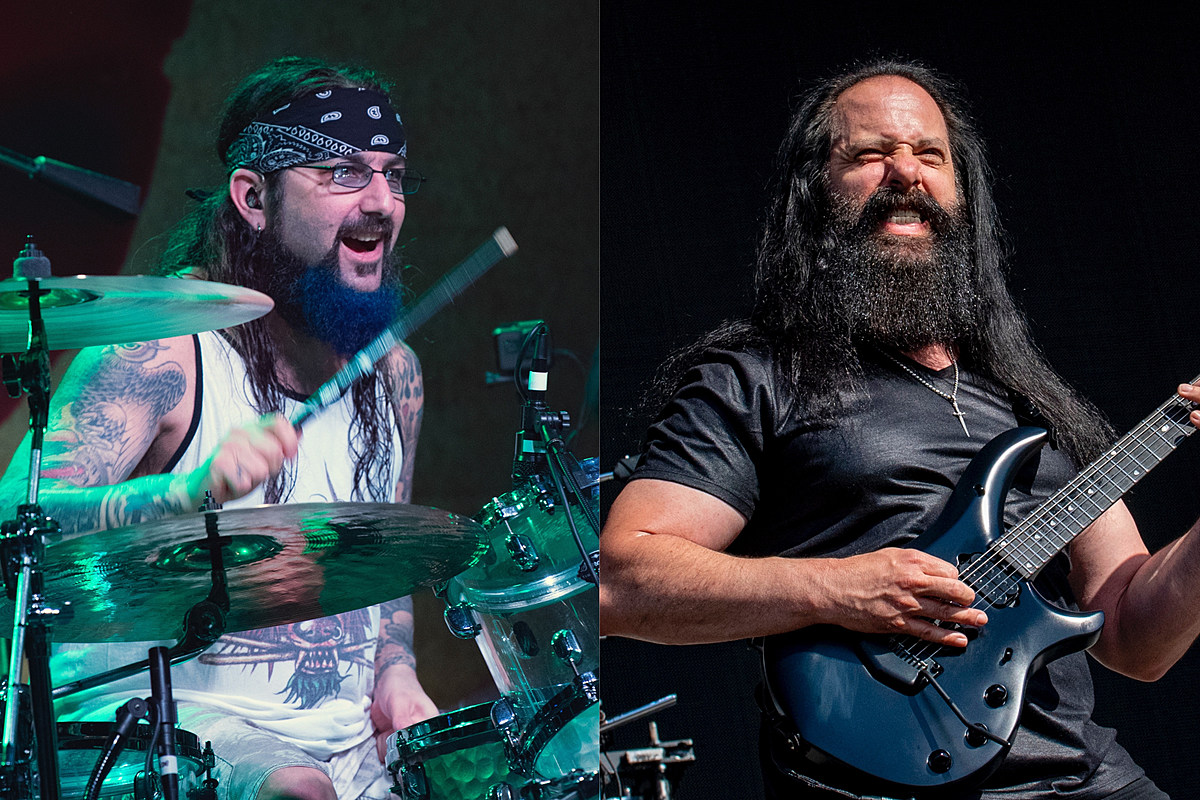 Former Dream Theater bandmates John Petrucci and Mike Portnoy have reunited for their first album together in a decade. Portnoy revealed via social media that he played drums on Petrucci’s upcoming solo album, Terminal Velocity.

The team of Portnoy and Petrucci has given progressive music some of its finest works, both with Dream Theater and Liquid Tension Experiment. Following his departure from Dream Theater in 2010, Portnoy has played with acts like Adrenaline Mob, Flying Colors, the Winery Dogs, Sons of Apollo, Metal Allegiance and Twisted Sister, experiencing an extremely prolific career outside of his most famous band.

Yesterday (July 1), both Portnoy and Petrucci announced their collaboration on the album, offering a teaser and track listing for Terminal Velocity while naming Steve Morse / Flying Colors’ Dave LaRue as their session bassist:

Terminal Velocity will be the first album John Petrucci and Mike Portnoy have both played on since Dream Theater’s Black Clouds & Silver Linings was released in 2009.

“You can see that with Lars and James of Metallica, Dimebag and Vinnie of Pantera, and Eddie and Alex Van Halen… I think John and I had that type of partnership,” Portnoy recently told MyGlobalMind. “We are both at our best and strongest when we work together, and I miss that relationship. He and I have a great personal relationship now and get together with our families. It would be a shame not to make music in some capacity in the future. I hope we can.” 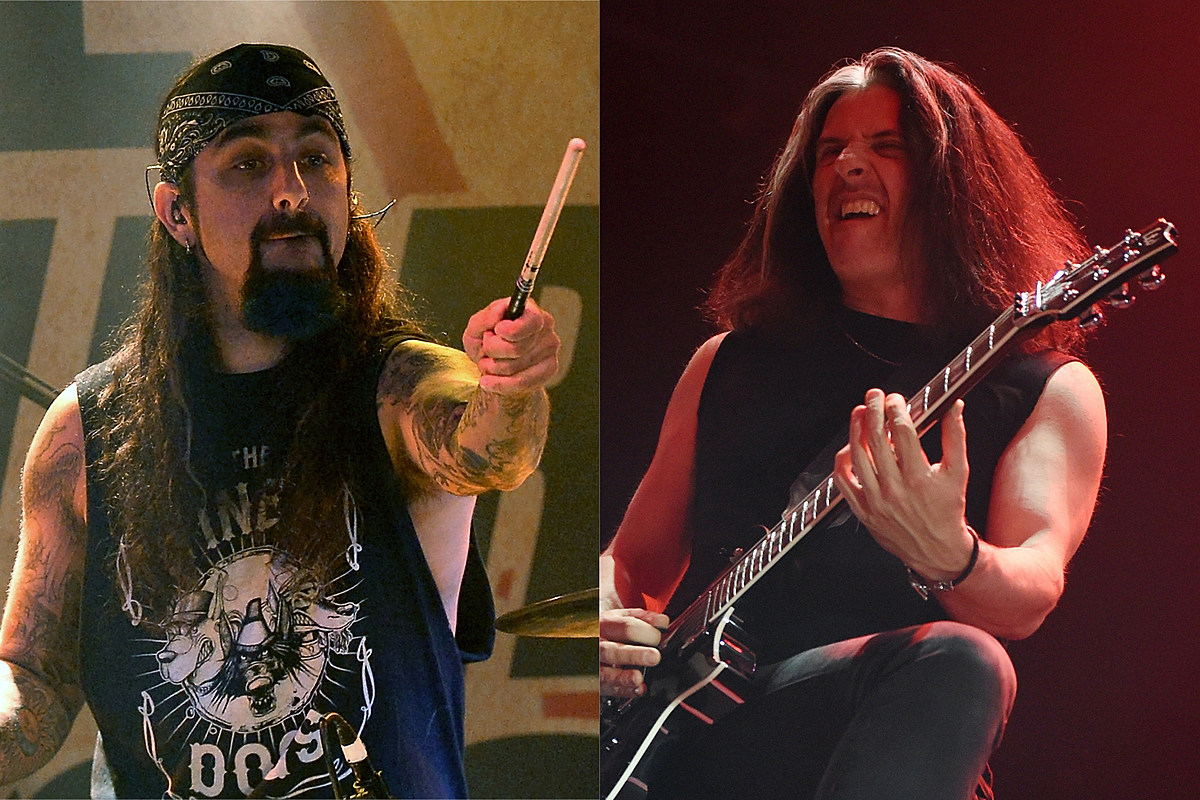 Rockers such as Mike Portnoy (Sons of Apollo, formerly Dream Theater) and Alex Skolnick (Testament) are using social media to urge others to wear face coverings during the coronavirus pandemic.

The drummer and guitarist, respectively, each took to their internet outlet of choice over the weekend to make their pleas for public safety. The musicians’ combined message is clear: Wearing a face mask in public isn’t a political act. It merely helps protect those around you who may be more vulnerable.

For Portnoy, that meant highlighting a video of a customer refusing to wear a mask inside of a store. Such disruptions are growing more common as some claim that retailers requiring masks infringes on their liberty. However, on Sunday (June 28), the percussionist explained how such a stance is uncaring.

“What the hell is wrong with some people?” Portnoy asks. “All because she’s supposed to wear a mask in a store to protect other people. How much more childish, irresponsible and selfish can people be? Are they throwing fits because they have to wear a seatbelt in the car too?”

The drummer continues, “This isn’t about you, it’s about others! How can people like you be so selfish? It is so you don’t spread your potentially infected germs onto other people who may be vulnerable and at-risk! How isn’t that soooo blatantly obvious? And this isn’t about ‘sides’ or politics!”

Skolnick shared a similar statement. The previous day (June 27), the Testament headbanger and frequent jazz guitarist posted a selfie-style video on his Instagram account. In it, he mocks those who maintain that required facial coverings in public encroach on their rights.

“‘Our freedom! You can’t tell me to wear a mask!'” Skolnick derides. “I’m sorry, I have to vent. This is the stupidest thing I’ve ever heard. You’re gonna make it political, wearing a mask? Going indoors to restaurants and breathing on everybody, making that political? It’s the dumbest thing I’ve heard since freedom fries.”

20 Ways to Binge on Rock + Metal History While in Quarantine 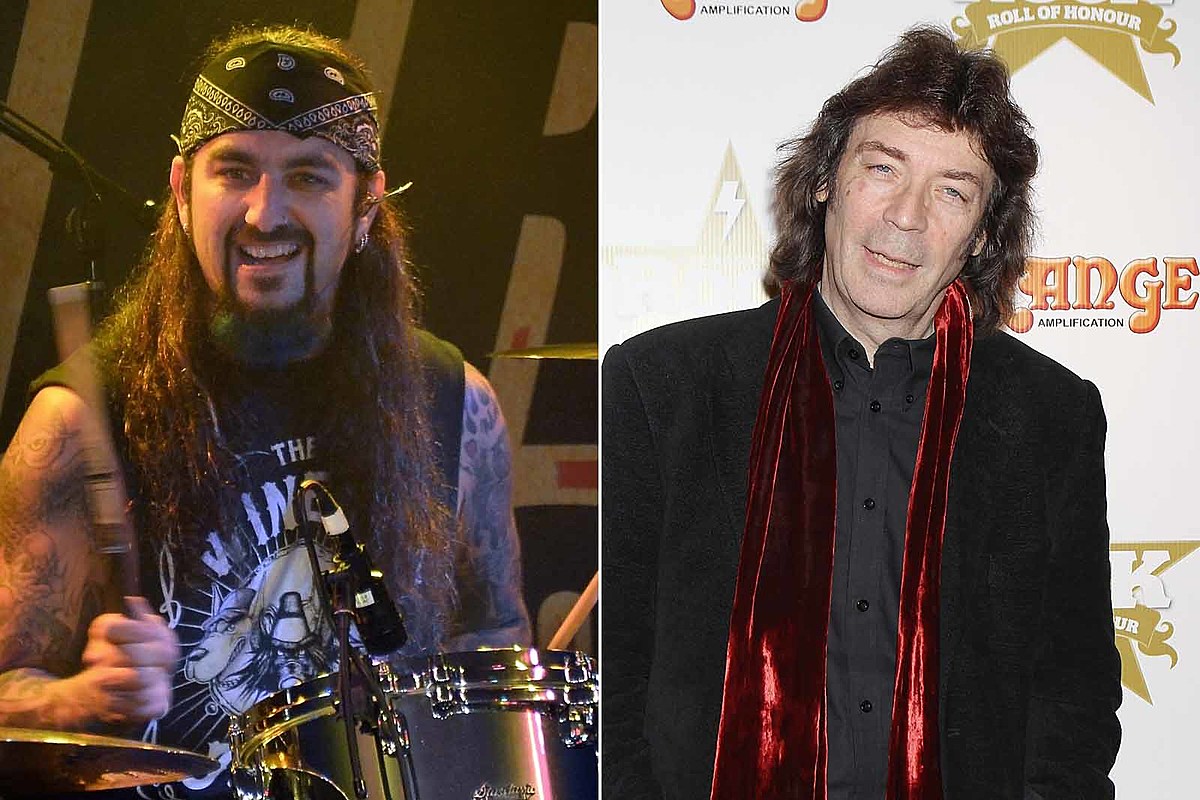 The Prog Report is putting on an all-star Prog From Home concert, which will take place next Saturday (May 9) at 2PM Eastern and feature performances by such notables as Mike Portnoy, former Genesis guitarist Steve Hackett and Neal Morse.

You can watch the show, which is being made “in support and celebration of doctors, nurses, first responders and all health-care workers,” from the Prog Report’s YouTube channel. It will include contributions from such prog notables as Jordan Rudess of Dream Theater, Ray Wilson (Genesis), Oliver Wakeman, Paul Bielatowicz (Carl Palmer’s ELP Legacy), Michael Sadler (Saga), Nick Barrett (Pendragon), Nick D’Virgilio (Big Big Train) and Bruce Soord (the Pineapple Thief), and will also feature some special guests. You can see the full list of artists at Prog Report.

Portnoy’s current band, Sons of Apollo, were in the midst of a European tour in support of their new record MMXX when the coronavirus pandemic hit. The group — which includes former Guns N’ Roses guitarist Ron “Bumblefoot” Thal, Mr. Big bassist Billy Sheehan, former Journey singer Jeff Scott Soto and Portnoy’s former Dream Theater bandmate Derek Sherinian — scrapped the remainder of their dates as venues across the continent were being shut down out of concerns for the public health.

The concert is announced as more and more tours are postponed due to COVID-19. Yesterday, the Eagles put off the remaining dates on their Hotel California tour, which started back in February and was never completed, until September 2021. No decision has been made regarding the summer’s biggest tour, featuring Motley Crue, Def Leppard, Poison and Joan Jett, but Motley Crue released a statement saying that an official announcement on its status will be made by June 1, two and a half weeks before its planned start date. 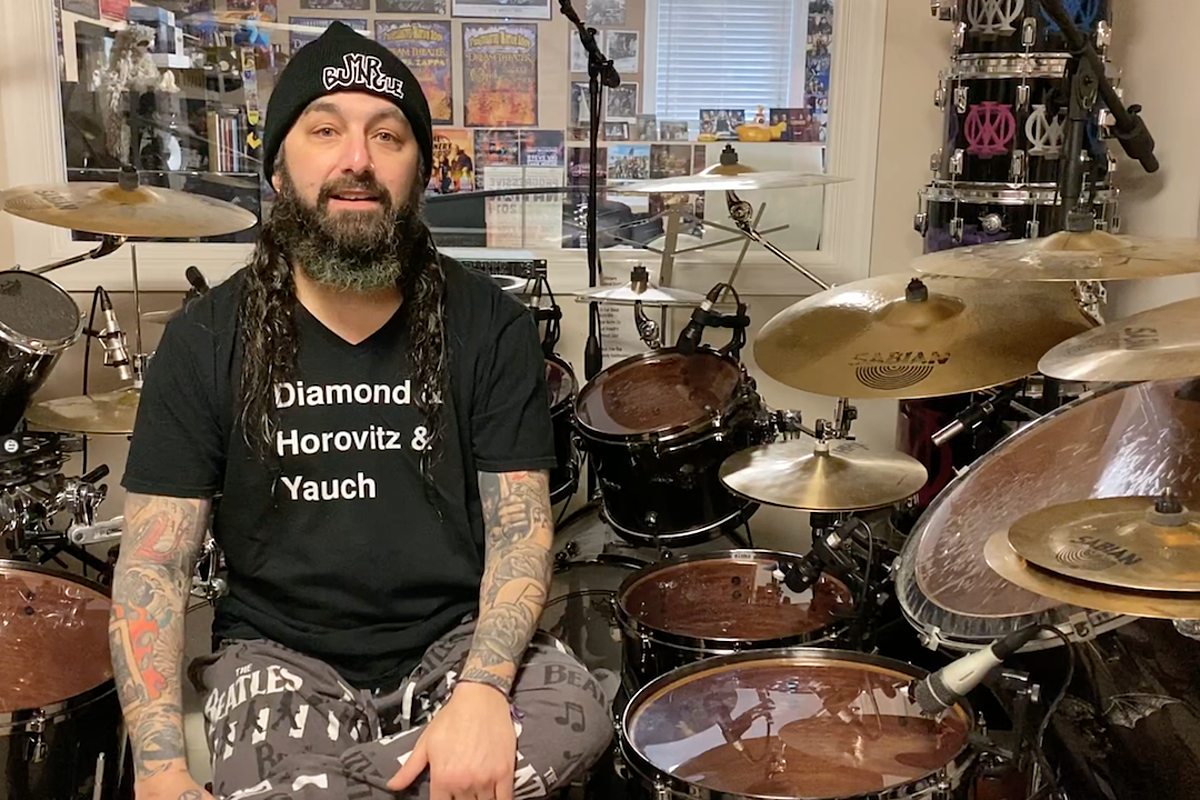 Legendary drummer Mike Portnoy is checking in from quarantine to recommend music and movies to binge. Portnoy makes sure to shout out new albums from veterans like Sepultura and Testament while paying respect to titans of the future like Code Orange.

Surrounded by one of his gigantic drum kits, Portnoy took a moment away from buying his pets Bark Boxes and recording Ramones covers to address the fans. “I hope you’re hanging in there,” he begins. “I know these are crazy, unprecedented times. I don’t think I’ve ever spent this much time at home in 20 years now. I know we’re all missing being out there with friends, we’re missing going to concerts, I’m missing playing concerts, but we’ve got to do what’s right. We’ve got to stay safe, stay inside, stop the spread.”

“Look at the bright side,” he continues. “You can listen to some new music that’s out — listen to the new Code Orange or Sepultura or Testament. Or if you want to experiment with some different styles of music, listen to the new Fiona Apple or Once and Future Band.”

As for watchables to binge on, Portnoy recommends Ozark, Better Call Saul and all 18 hours of Twin Peaks: The Return.

“Hug your kids. If you are a kid, hug your parents. Cuddle with your pets. Pick up a new instrument… Stay creative, stay productive, stay healthy and stay inside,” the drummer concludes.

20 Ways to Binge on Rock + Metal History While in Quarantine 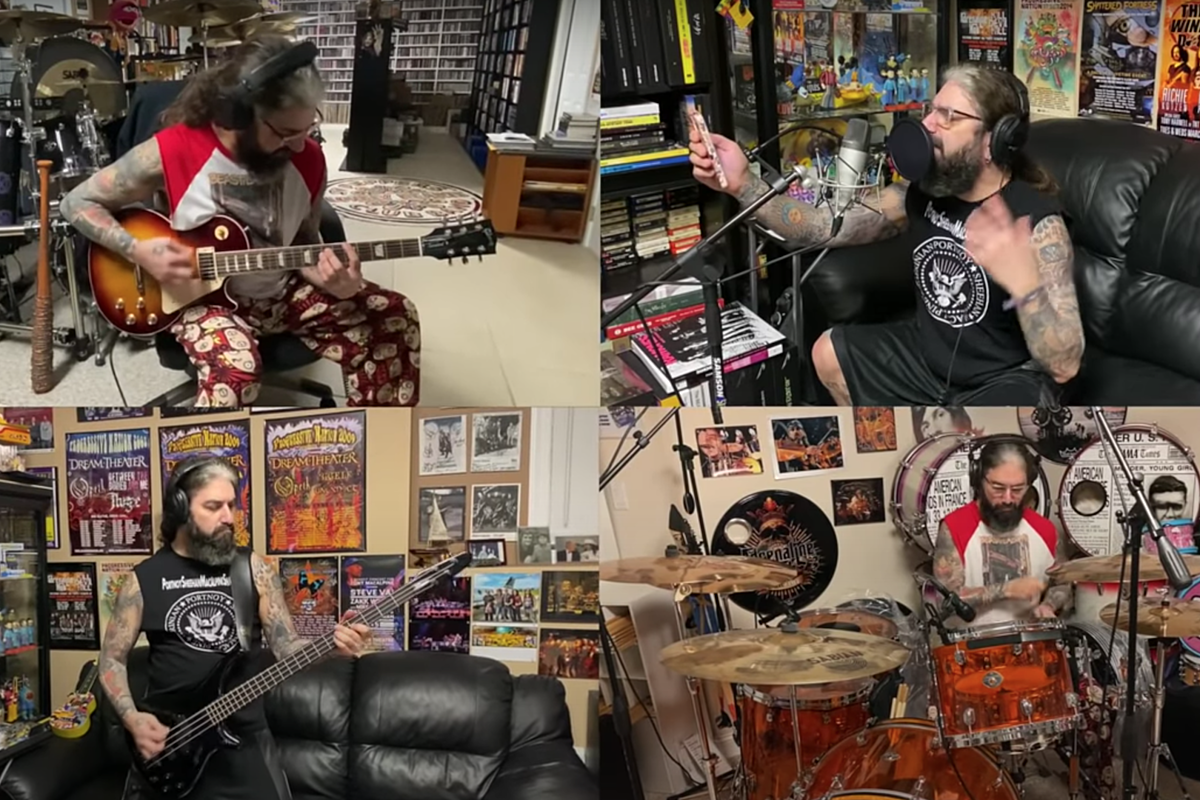 Mike Portnoy has rewritten a Ramones classic for the quarantine age. From home, the legendary drummer picked up a guitar, bass and microphone to record “We’re a Happy Family” with a new set of lyrics.

Portnoy teased the cover song with a photo of himself as a child meeting Joey, Dee Dee, Johnny and Marky Ramone:

The cover of “We’re a Happy Family” also features Mike’s actual family members: Marlene, Melody and Max… along with his extended four-legged family in Mickey, Mini and Mittens. You can even catch a Hello Kitty drum kit in the background as an easter egg.

Check out Mike Portnoy’s solo version of “We’re a Happy Family” along with a homemade music video for the track below. 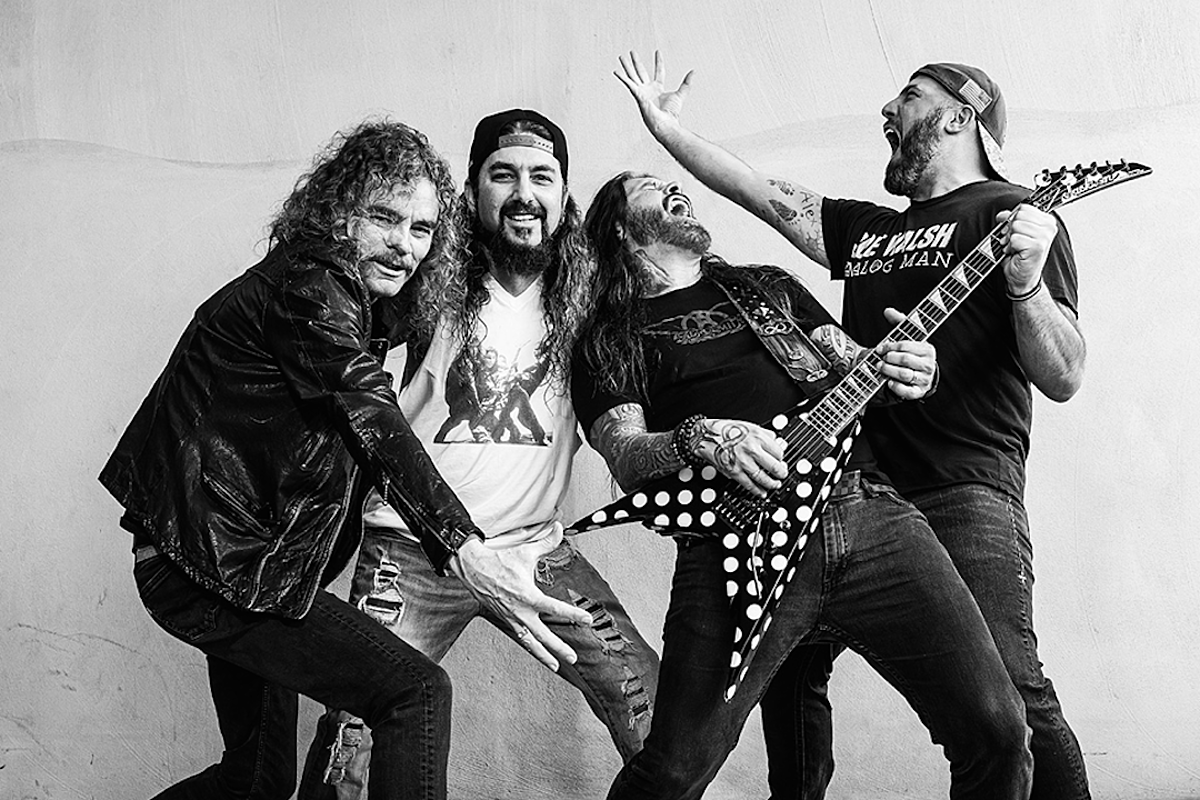 BPMD, the new supergroup comprised of Bobby Blitz (Overkill), Mike Portnoy (Sons of Apollo, The Winery Dogs, ex-Dream Theater), Mark Menghi (Metal Allegiance) and Phil Demmel (Vio-Lence, ex-Machine Head) have just detailed their American Made covers album in addition to releasing a video for their version of Aerosmith‘s classic “Toys in the Attic.”

The American Made record strictly features cover selections from American bands, such as ZZ Top, Ted Nugent, Blue Oyster Cult and, the primary inspiration behind the project, Lynyrd Skynyrd. Last summer, bassist Menghi was in his backyard listening to ’70s rock songs when Skynyrd’s “Saturday Night Special” came on and he thought about how much fun it would be to play the song.

It was Menghi’s 8-year-old son who encouraged him to pursue a covers album, so he put the lineup together. Each member picked two ’70s tracks from American groups and the recording sessions were soon underway.

“Toys in the Attic,” which can be heard in the music video below, serves as the first preview of American Made as BPMD put a metal twist on the 1975 Aerosmith favorite.

For Blitz, this wound up being a nod to his roots as a singer as he recalled, “I remember waaaaaaaaaaay back when Overkill formed, we were cutting our teeth on covers as I was finding my way around the mic. The Aerosmith covers were right in my wheelhouse, so when Mike picked ‘Toys’ to cover, I was like… ‘Hell Yea’!”

“It was tricky because Aerosmith have two guitarists, Joe Perry and Brad Whitford, playing different things,” Demmel said, up for the challenge. “So, as one guitar player, I had to pick a medium place between the two that sounded good,” he went on, noting, “I thrashed it up a little by adding a lot of down picking and some gallops and triplets.”

American Made drops on June 12 through Napalm Records. Get the details on the rest of the album below the “Toys in the Attic” music video and pre-order your copy here.