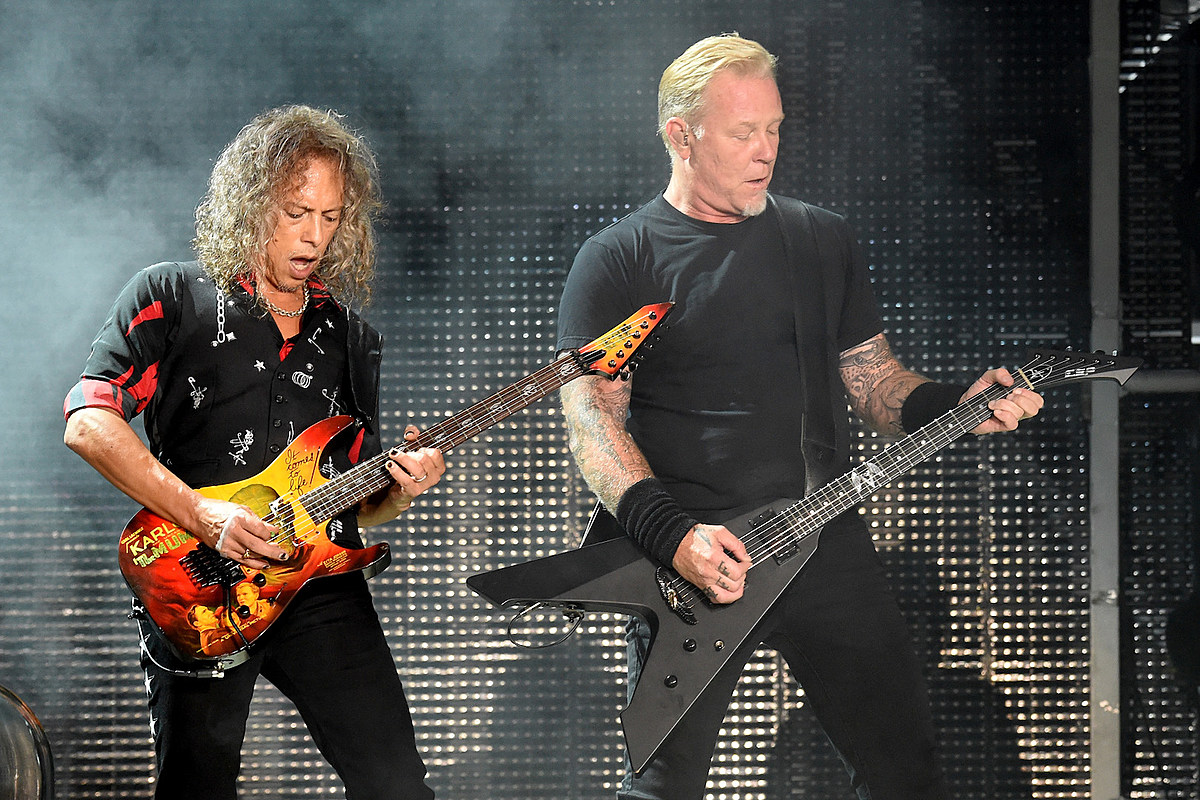 Metallica‘s signature “Blackened” whiskey has been around for a few years now, but ever since James Hetfield‘s return to rehab in the fall of 2019, some have questioned the integrity of the decision to continue the liquor line. Kirk Hammett has defended the whiskey, noting that the two should not be compared.

“You can’t compare the two things. James’s struggle to get dry is a completely personal matter mentally and emotionally,” the guitarist told the Daily Star. “The fact that we produce, bottle and sell alcohol is totally independent of this. It is completely up to you whether you drink or not. And I think I can sell what I want. If I were a diabetic, that wouldn’t mean that I couldn’t sell sweets.”

“Blackened” is an American whiskey in conjunction with master distiller Dave Pickerell, and was first announced by the band in 2018. Metallica shared the news that Hetfield was returning to rehab a little over a year later in September of 2019, which resulted in the cancelation of their tour in Australia and New Zealand with Slipknot.

Hetfield made his first few post-rehab public appearances in the beginning of 2020, including a performance at an Eddie Money tribute show. Metallica had some tour plans throughout the year, which were postponed due to the coronavirus pandemic. In May, the rockers announced a limited edition “Blackened” whiskey and a vinyl box set.

Metallica: A Photo Timeline of Their Remarkable Career 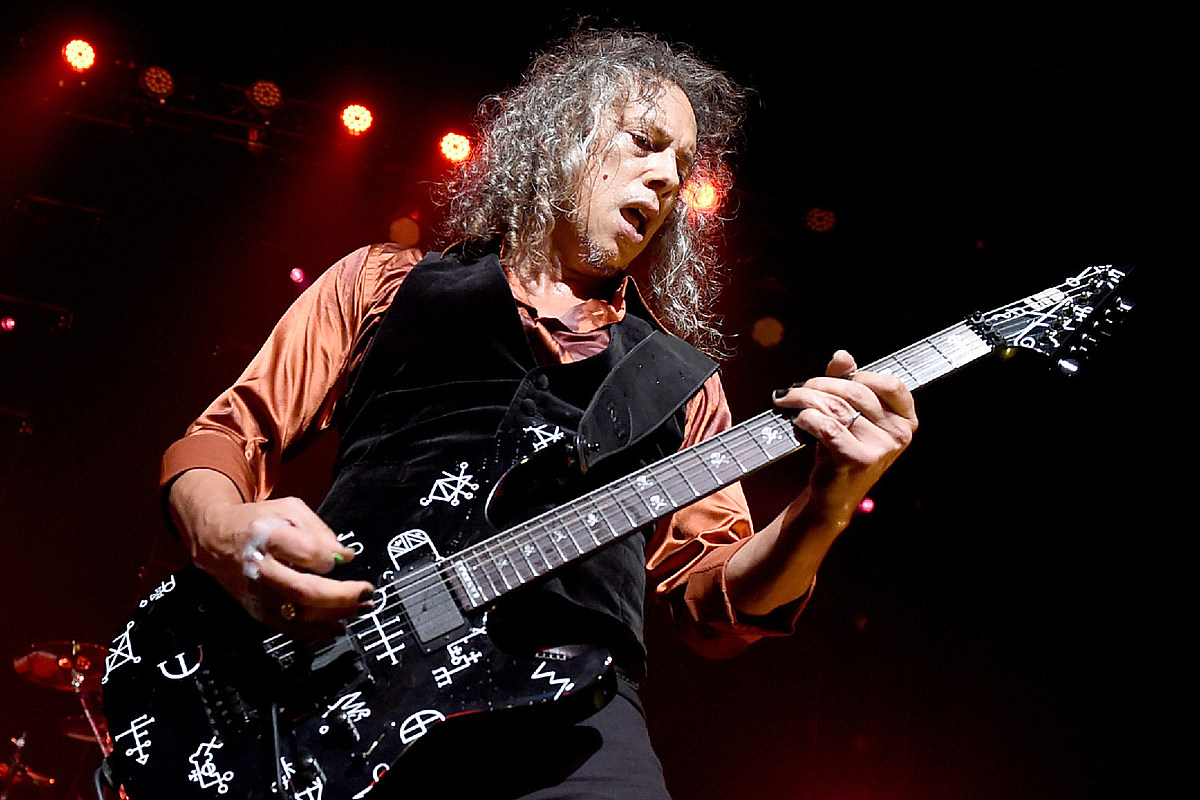 Kirk Hammett said there would be no point in trying to quit Metallica, because the band’s legacy would follow him wherever he went.

The guitarist was discussing some of the difficult experiences the band members have been through over their 39-year history. Hammett has been a part of the lineup for all but two of those.

“We’ve definitely survived so much and have become brothers,” Hammett told the Daily Star in a new interview. “We love one another, even if we sometimes hate each other as well. But that’s the way it is with brothers. We realize that we are bound to one another for the rest of our lives.”

He pointed out that the he “could say I’m leaving Metallica. And then what? Everyone would look at me and say, ‘Hey, that’s the Metallica guy.’ So, I could physically leave the band, but emotionally, symbolically, mentally, I wouldn’t be let go anyway. What would that do for me?”

Hammett also reflected on Metallica’s decision to release a signature Blackened whiskey, even though frontman James Hetfield has struggled with alcohol issues for years.

“You can’t compare the two things,” he said. “James’s struggle to get dry is a completely personal matter, mentally and emotionally. The fact that we produce, bottle and sell alcohol is totally independent of this. It is completely up to you whether you drink or not. And I think I can sell what I want. If I were a diabetic, that wouldn’t mean that I couldn’t sell sweets. … James is working his way out of his situation. We can really only try to support him.”

Hammett noted that Metallica continue to hold virtual meetings every week and that he has around 600 “musical ideas” to contribute to the band’s next record. 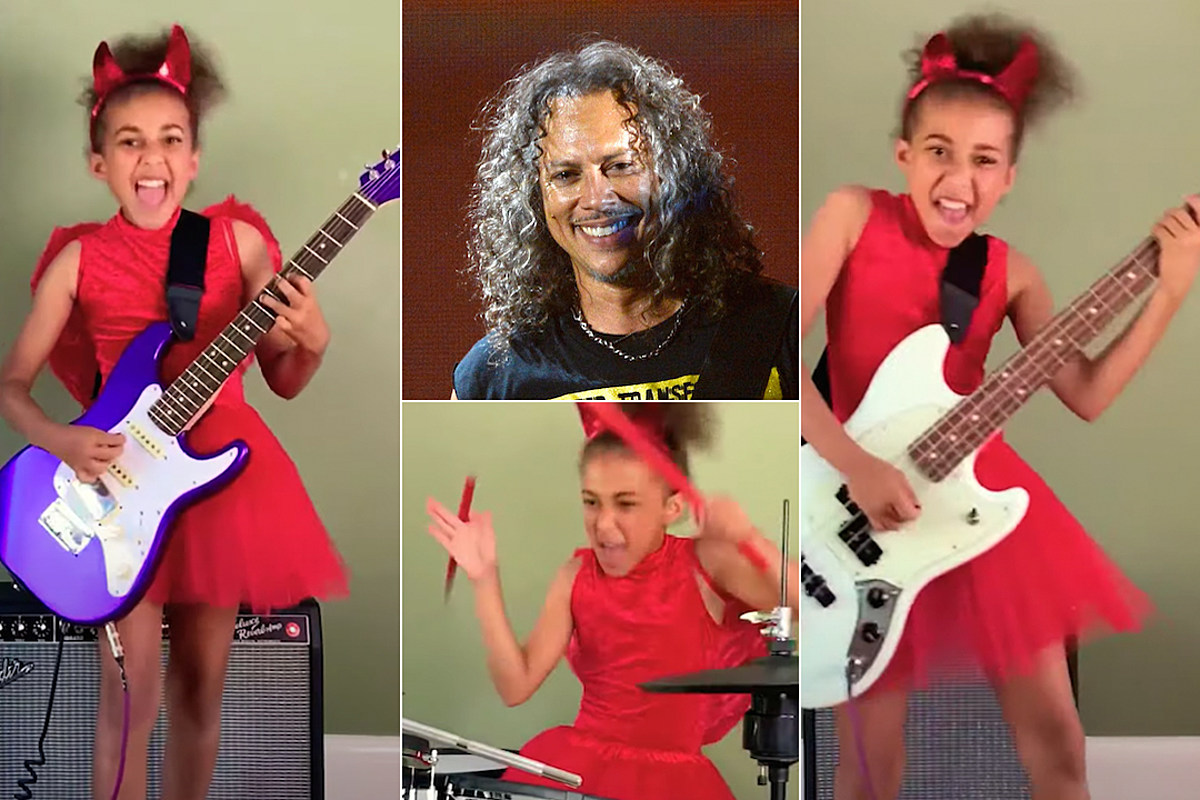 Imagine being 10 years old and already your cover songs on YouTube have caught the eyes and ears of both Rage Against the Machine‘s Tom Morello and Metallica‘s Kirk Hammett? Such is the life of Nandi Bushell, a viral young rock star who most recently blew Hammett away with her multi-instrumental cover of “Enter Sandman.”

Although her clip is only one minute long, it says everything we need to know — Nandi Bushell is a born rocker. Outfitted in a red devil tutu, she tackles the guitar, bass and drum parts for the opening moments of Metallica’s Black Album smash hit, really building the tension while pounding away on the drum kit. She even sticks her tongue out just like Lars Ulrich does!

Having already ensnared Morello with her Rage Against the Machine cover that prompted the legend to personally gift her with one of his signature guitars, it’s no surprise Bushell was on Hammett’s radar as well.

On Instagram, the Metallica axeman re-shared Bushell’s post, exclaiming, “How could I not repost this?” His post drew thousands of comments as fans around the world heaped praise onto the inspiring youngster.

Watch the clip below.

For more covers of metal’s biggest hit song, check out our these 12 Best Covers of Metallica’s “Enter Sandman.”