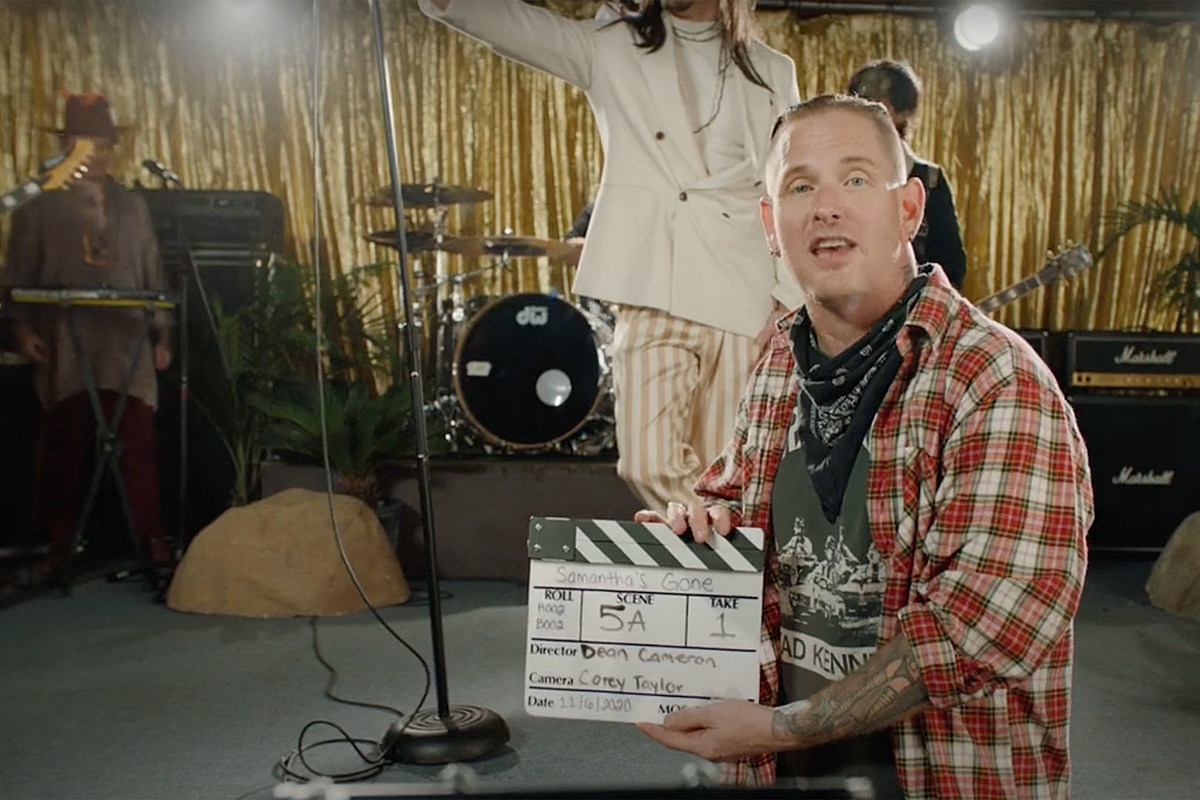 Video shoots can be tedious and sometimes the chemistry doesn’t work, but you never know what talent is just hanging around the set. That’s the basis for Corey Taylor‘s new cameo-filled video for “Samantha’s Gone.”

Taylor and his band have a little fun with the video trope, with each of his solo band members taking roles on the crew while a motley bunch of rockers take the stage to perform “Samantha’s Gone.” But when the director, played by Ski School and Summer School star Dean Cameron, has the band take a break, Corey and his cohorts seize the day, taking the stage and seemingly wowing the remaining crew and director … or do they?

Taylor stated to Bravo’s Daily Dish, “The video for ‘Samantha’s Gone’ served two purposes: making fun of so-called ‘indie rock’ bands and getting all my friends together to hang out and have a good time. We all went back and forth between having fun and social distancing. Watching the first ‘band’ was great, then being fired from our OWN song in favor of Steel Panther was the icing on the cake – can’t wait for everyone to see it!”

In other Corey Taylor news, the rocker has given his backing to a new limited-edition coffee collaboration. The singer collaborated with Menotti’s Coffee in Venice, California for the CMFT Private Blend. You can order a bag at Taylor’s webstore. 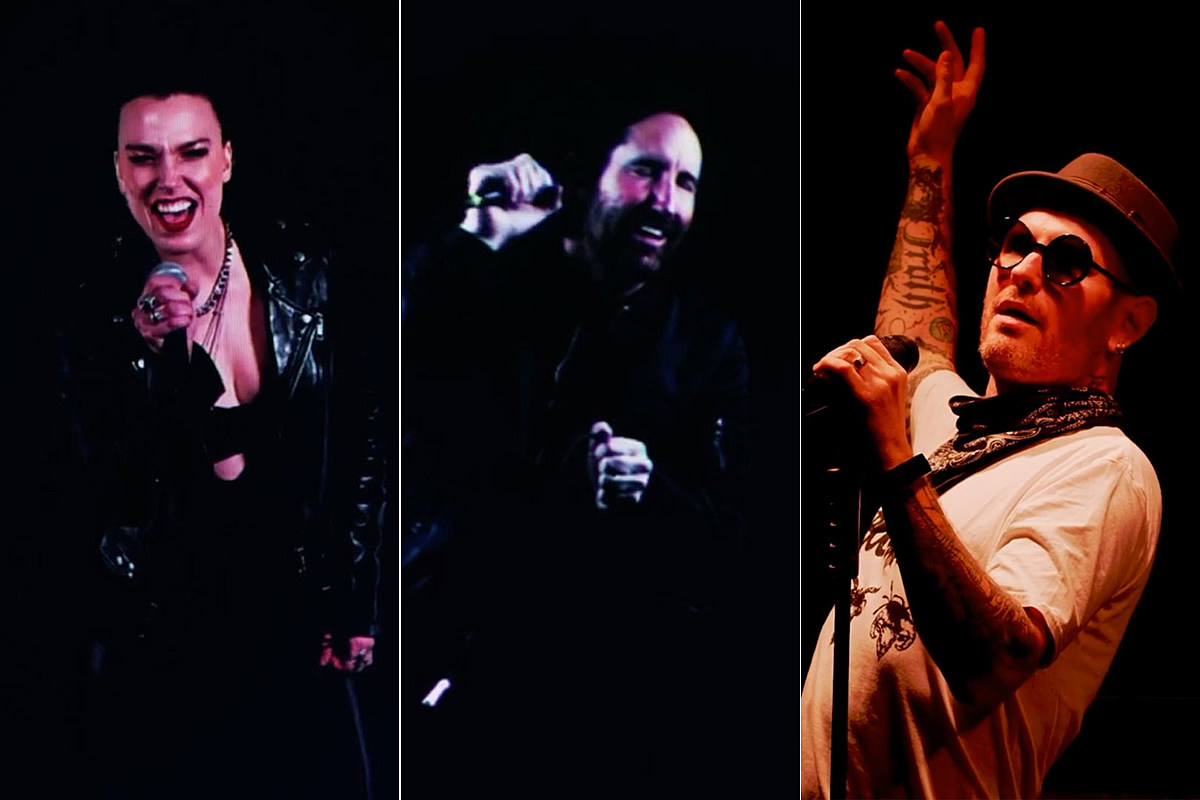 The lineup impressive, the performances marvelous and the technological feat bringing it all together went above and beyond, but it was the music of the late great David Bowie that really took center stage at the David Bowie virtual celebration taking place Saturday night (Jan. 9).

The “A David Bowie Celebration: Just for One Day” event was initially set to take place Friday (Jan. 8) in celebration of Bowie’s birthday but technical difficulties and Covid-related restrictions led the massive undertaking to be pushed a day to make sure all went off without a hitch and the move paid off as everyone involved appeared on top of their game.

Duran Duran opened the show with their stellar new cover of “Five Days,” bolstered by the piano accompaniment of longtime Bowie pianist Mike Garson who also hosted the evening’s events. Set against the fantastical backdrop, it provided a glimpse of what was to come as artists appeared throughout the evening either via virtual remote or often in pre-produced performances, but it was all tied together to mirror a united concert appearance as possible.

Halestorm‘s Lzzy Hale and Broadway star Lena Hall united to bring some power and grit to Bowie’s “Moonage Daydream,” a performance that left both musicians with a high afterward. Hall shared her admiration and desire to collaborate with Hale, while Hale spoke on Twitter about the transcendent moment of paying tribute to one of their muses.

The early part of the show leaned more to the rockers, with Smashing Pumpkins‘ Billy Corgan delivering a spine-tingling cover of “Space Oddity” featuring a spacy piano arrangement by Garson. This was followed by Jane’s Addiction‘s Perry Farrell with his wife Etty Lau Farrell and a masked dancer delivering a more theatrical interpretation of “The Man Who Sold the World.” Living Colour‘s Corey Glover also earned raves early in the night for his soulful take on “Young Americans” that offered a “church” moment at the end showing the full range of Glover’s vocal capabilities.

Def Leppard‘s Joe Elliott stuck around for a double dose of performances, first giving an understated but powerful performance of Bowie’s “Win” that included a new arrangement from Garson. Then, embracing his love of glam, Elliott joined the band of Bowie alums for “Ziggy Stardust.”

The Pretty Reckless‘ Taylor Momsen provided one of the night’s highlights, appearing remotely and giving a vulnerable and beautifully heartfelt performance of “Quicksand” accentuated by Garcon’s piano playing and an acoustic guitar backing.

One of the more anticipated performances of the night came from Ground Control, a supergroup made up of Slipknot‘s Corey Taylor, Foo Fighters‘ Taylor Hawkins and Jane’s Addiction’s Dave Navarro and Chris Chaney. Corey Taylor sat out the opening number as Jon “Lou” Lousteau sat in on drums as Taylor Hawkins led a raucous version of “Rock ‘n’ Roll Suicide.”

The Slipknot vocalist, sporting a Kid Bookie T-shirt, then joined his mates onstage. He opened the performance revisiting a portion of Bowie’s cameo from the Ricky Gervais series Extras offering up a bit of “Chubby Little Fat Man” before the group launched into “Hang On To Yourself.” The high energy performance was set against a kaleidoscopic backdrop with Taylor taking a tumble at the end of the set after getting worked up over the performance.

The night also included a killer cover of “Jean Genie” from Jesse Malin and a Peter Frampton-led rock up of “Suffragette City” before offering a showcase to one of Bowie’s favorite rockers, Trent Reznor. The Nine Inch Nails leader initially joined Garson and a band of Bowie vets for a haunting and electronic-based version of “Fantastic Voyage.” Then a pre-taped stylistic video for “Fashion” followed with Reznor joined by his How to Destroy Angels bandmates Mariqueen Maandig and Atticus Ross for a stellar cover of the Bowie classic.

The end of the evening also provided some wonderful performances. The Cult‘s Ian Asbury delivered a vulnerable take on “Lazarus,” Yungblud wowed the viewing audience on “Life on Mars?” and Queen‘s Adam Lambert got all glammed up for his performance of “Starman.” Like Hale earlier in the night, Yungblud too marveled at the moment as seen in the tweet below.

The three-hour celebration came to an end on a high note with Bowie veteran Bernard Fowler leading a rendition of “Heroes” which gave the night its “Just for One Day” moniker. The backing band for that performance included a next generation hero, with young YouTuber Nandi Bushell sitting in on drums for the performance.

Check out the full setlist for the show below. The “A David Bowie Celebration: Just for One Day” will continue to stream on Sunday and you can check it out here.

“A David Bowie Celebration: Just for One Day” Setlist 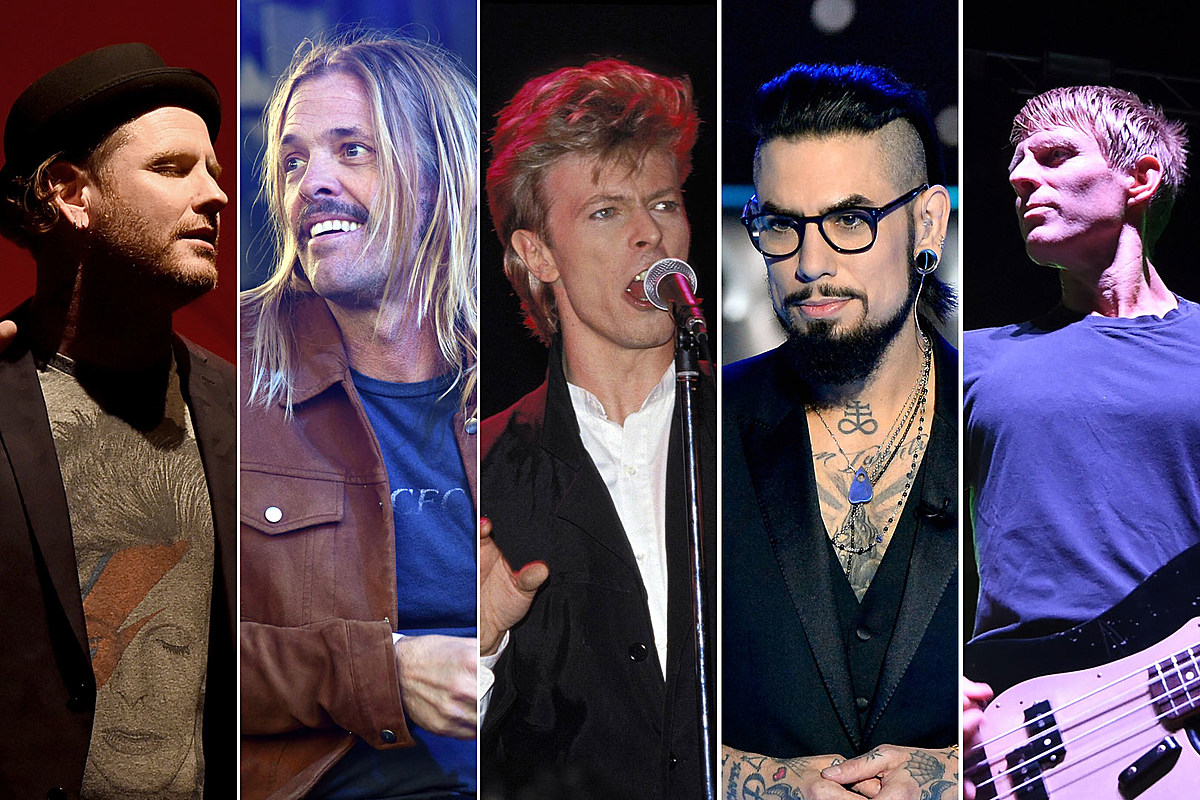 This year’s David Bowie tribute concert has “really made the grade,” securing some top level talent to pay homage to the Thin White Duke, albeit in a virtual manner this year due to the pandemic. The upcoming A Bowie Celebration: Just for One Day concert will take place this Friday (Jan. 8) with some great recent additions including a supergroup taking the name Ground Control featuring Slipknot‘s Corey Taylor, Foo Fighters‘ Taylor Hawkins and Jane’s Addiction‘s guitarist and bassist Dave Navarro and Chris Chaney.

Bowie’s longtime pianist Mike Garson will also be on hand leading a group of Bowie alumni who will play throughout the evening.

Though song assignments have not been revealed in advance, the naming of the Taylor-led supergroup Ground Control could be a nod to them performing the classic Bowie track “Space Oddity,” but we’ll find out when the show takes place.

The concert will take place Friday night at 9PM ET / 6PM PT and tickets to watch this special tribute are currently available for $25 here. There are also assorted merch and experience bundle options available at this location.

Bowie’s birthday is Jan. 8 and he died at the age of 69 on Jan. 10, 2016 making this coming weekend the fifth anniversary of his death. Bowie was inducted into the Rock and Roll Hall of Fame in 1996.

A Bowie Celebration: Just for One Day Trailer 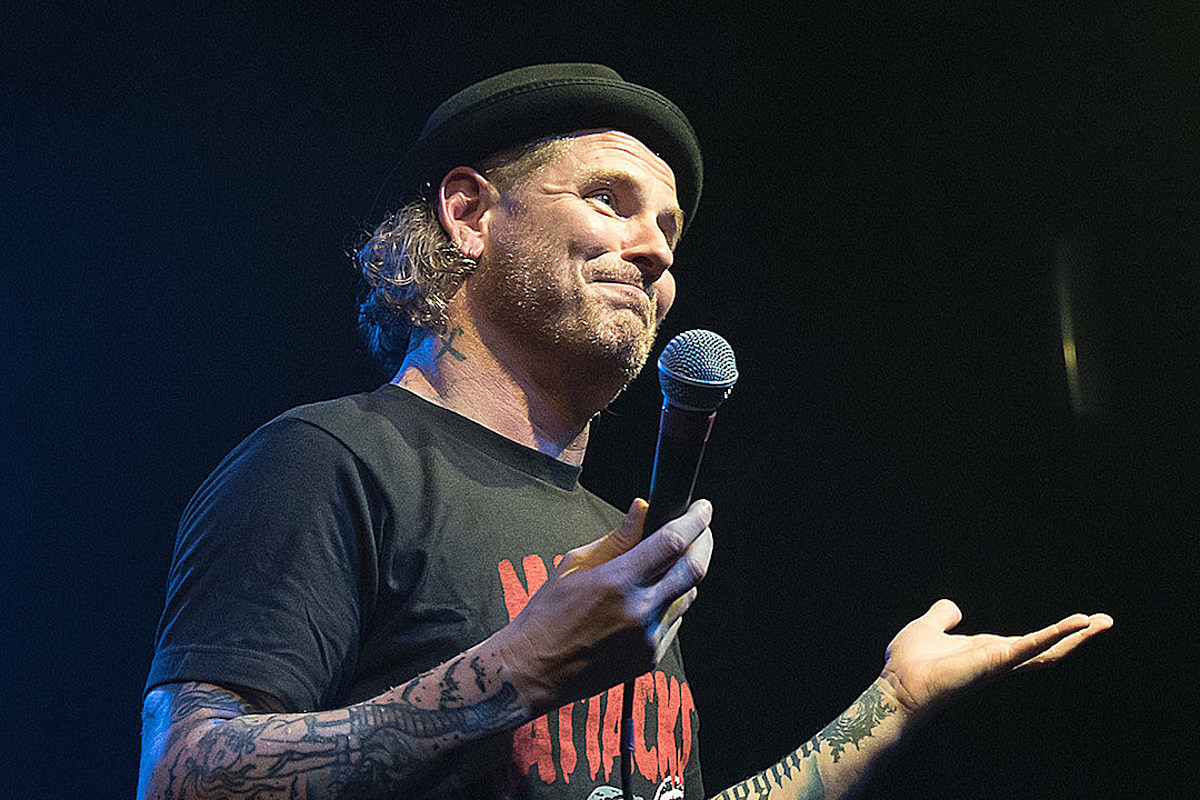 New Year’s resolutions are a common way for people to set goals for themselves at the beginning of each year. Corey Taylor has quit a lot of his old habits that were affecting his health negatively, but he has one sweet vice left that he wants to kick.

He wants to give up sugar once and for all.

The Slipknot and Stone Sour frontman believes that being around his children makes it more difficult for him to avoid the substance. “Plus my sweet tooth is also just so ridiculous: I once filled a red Solo cup with peanut butter and a half bag of M&Ms and ate it like it was a bowl of cereal… this is the kind of person you’re dealing with. I’m not amateur – I’m a professional fat-ass!”

Aside from his sugar addiction, Taylor claimed he’s in better shape now than he was prior to the quarantine because he’s been working out frequently. Hopefully, his healthy lifestyle will pay off when he’s on the road with Slipknot this summer.