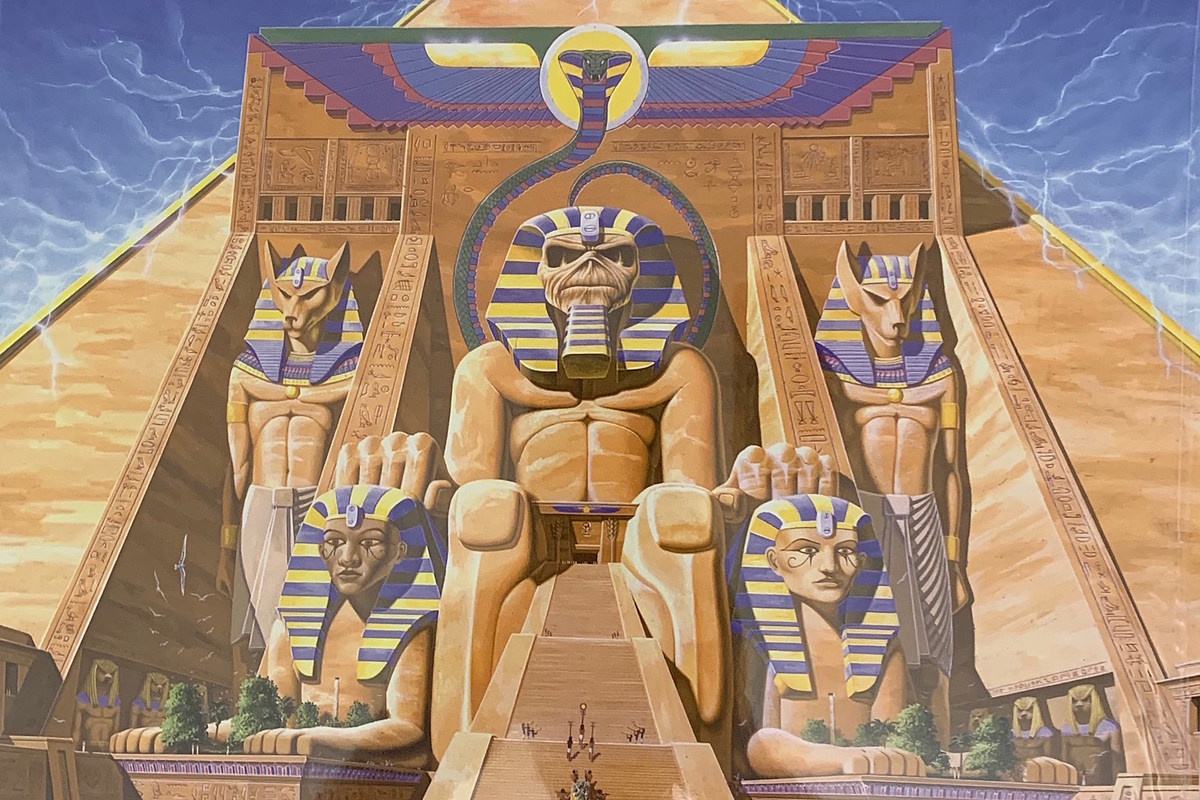 Iron Maiden‘s 1984 album Powerslave is perhaps the most important album in the band’s catalog, at least when it comes to understanding their absolute domination of heavy metal the world over.

It was the fifth record in as many years for the New Wave of British Heavy Metal breakouts and the Egyptian-themed album cover by artist Derek Riggs set Maiden up for their most ambitious tour to date — one that may have been the most demanding any metal act has ever embarked on.

There’s a rich history to this magnificent album, which leads us to a bit of trivia here with 13 Powerslave Facts Only Superfans Would Know. Remove all the wheelblocks, there’s no time to waste!

1. Well, hello again, everyone!
Iron Maiden’s music may have been consistent — their seven album run in the ‘80s is practically unmatched — but on Powerslave it was the first time there was any consistency among the lineup from album to album. Nicko McBrain was the latest transplant on Piece of Mind and, moving forward, this lineup remained intact until Adrian Smith’s exit in 1990.

2. From England back to the Bahamas! But before we get there… New Jersey?
After fleeing the dreary England winter weather for Compass Point Studios in the Bahamas for Piece of Mind, Maiden figured a repeat sojourn would be just cracking. But first, the band had some writing to do, so before hitting the island, they hunkered down in… New Jersey. Listen, “Joizee” folks, your state has produced some of rock and metal’s best, we know. That’s probably why Powerslave is so excellent. Before you get too cocky, though, Steve still wrote most of “Rime of the Ancient Mariner” once they boarded another flight further south.

3. So long, you amazing instrumental tracks, you
Unable to come up with any lyrics, Iron Maiden elected to let the guitar melodies do the singing on the aptly titled “Losfer Words (Big ‘Orra).” Eddie and the boys had last released two instrumental songs — “The Ides of March” and the chaotic “Genghis Khan” — on 1981’s Killers, and, here, it would be the last instrumental track they gave us to date.

4. Dave Murray, where art thou?
Dave Murray, despite being the longest tenured member of Iron Maiden not named Steve Harris, has never been a primary songwriter within the band. Still, he’s usually good for one or two tracks that go on to claim “deep cut” status (“Judas Be My Guide,” “The Prophecy,” “Deja-Vu” to name just a couple). On Powerslave, however, not a single track is attributed to him, even on collaborative efforts. Whatever, we’ve still got all those buttery Davey solos on here.

5. 189 shows? Sure, just give us 331 days
Has there ever been a more rigorous tour than the ‘World Slavery’ tour, which found the band playing 189 shows in a total of 331 days from start to finish between 1984 and ‘85? Of the originally slated 197 gigs, only eight had to be canceled, half of them for health reasons. Pro baseball players might be going, “So what? We played 162 games a season,” but Iron Maiden don’t get to lounge around in left field picking their arses when there’s heavy metal to be played. Bruce, how on Earth did you pull this off, mate?

6. Iron Maiden go behind the Iron Curtain
In the thick of the Cold War, it was unheard of for a western band to penetrate the Eastern Bloc (the collective of countries under rule of the Soviet Union), much less a heavy metal act with the indescribably massive stage production Maiden’s crew had to lug from gig to gig. With their sights set on world domination, the band was undeterred by geographical boundaries and menacing political systems. Remember, Iron Maiden’s gonna get you, no matter how far. Shoutout to anyone who owns the documentary LaserDisc.

Iron Maiden, Behind the Iron Curtain

7. No live love for the album’s mid-section
For how often fans name Powerslave as their favorite Maiden record, it’s a bit of a shocker the middle section of the album never made it into a set list. Not once. “Flash of the Blade,” “The Duellists” and “Back in the Village” never escaped the studio. To boot, “Losfer Words (Big ‘Orra)” was only played 70 times live and didn’t even remain in the set for half of the ‘World Slavery’ tour.

8. Rock in Rio: Conquering a continent with just one show
There is no place in the world where Iron Maiden are bigger than in South America, where fans are often reduced to tears, so grateful to have witnessed what many deem the world’s greatest metal band. Before Powerslave though, Maiden had yet to plant their flag in South America and claim it as their own, having never played a show there up until this point. Then came the inaugural Rock in Rio event, where the Brits played to a crowd of 300,000 people. “We conquered an entire continent overnight with that one show. And that was astonishing,” Dickinson told Kerrang.

9. Bruce Dickinson, that sneaky S-O-B
Every band argues. It’s perfectly normal. But what happens when the singer discretely eggs on a heated exchange between the band’s founding member and his rhythmic counterpart, the drummer? Fortunately, we know, because Bruce Dickinson secretly recorded a war of words between Harris and McBrain, which was later released as a “2 Minutes to Midnight” B-Side title “Mission From ‘Arry.”

A miscommunication onstage led to McBrain giving his roadie a right proper bollocking, which then incensed Harris that someone in his band had treated a crew member so poorly. At least Steve had a sense of humor about the whole thing after.

10. Can you find Mickey Mouse in the cover art?
Mickey may not be very metal, but everyone reading this has a favorite Disney film. Besides, is there some rule that states Brits can’t sell a million albums or two and go bugger off to the happiest place on earth? Didn’t think so. Artist Derek Riggs snuck in a few things in that magnificent piece of Egyptian-themed cover (“Wot, no Guinness?” “Bollocks” “Wot a load of crap” and “Indiana Jones was here”), setting himself up quite nice for the next album which had three baker’s dozen easter eggs.

11. Themes from The Number of the Beast return
It’s those blasted sixes again! Almost as if they were trolling those pearl-clutching religious zealots incensed over the chorus from “The Number of the Beast,” the “six-six-six” bit resurfaced on “Back to the Village” when Bruce sings “I see sixes all the way” and two more whispers of “six follow the initial one in the background.

12. “Flash of the Blade” flashes on the silver screen
If you’re not going to get a ton of radio support, why not land of spot on a horror film soundtrack? “Flash of the Blade,” which you now know was never played live, was chosen for the Dario Argento flick Phenomena, which was released in 1985. In the movie, a Swiss boarding school girl discovers her psychic ability to communicate with bugs and uses these newfound powers to put an end to a serial killer who has a habit for butchering women at the school.

13. Thanks for the poetry lesson, ‘Arry
We saved the 13th fact for the songs that spans over 13 minutes: “Rime of the Ancient Mariner.” Never has a song with no chorus been this good. Steve Harris wrote this one all to himself and he had bragging rights for Maiden’s longest track until Bruce locked himself away with a piano and a dream, crafting “Empire of the Clouds” in its 18-minute splendor.

Anyway… let’s focus here, this is about poetry! The original tale was told by the English-born William Taylor Coleridge, who penned it at the tail of the 1700s. Long, long story short… a sailor stops a guest at a wedding to recollect his treacherous events at sea, where mutiny led to near-certain death.