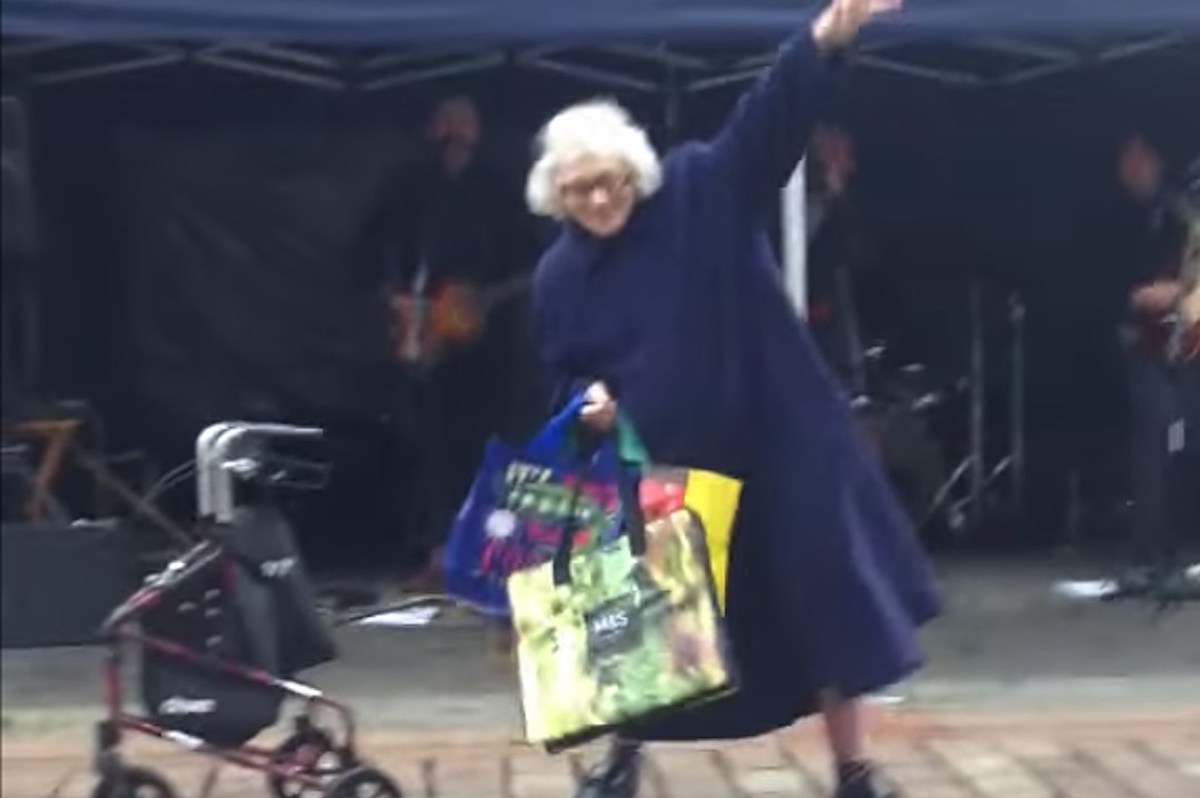 AC/DC‘s music is a universal language and an invitation to indulge in your free spirit. Or, at least, that’s what one elderly woman did when walking down the street, stopping to rock out to a cover band playing “Highway To Hell,” which was met with applause from the onlooking bystanders.

The scene that was just described took place in Paisley, Scotland at the Spree Music Festival in 2016. Cover band Badboys were wrapping up the title track to AC/DC’s classic 1979 record as the bag-wielding, wheelchair-pushing woman took the crowd by surprise. Clapping along to the song, she then struck a pose with one arm stretched toward the sky, unleashing her super-charged rock frontwoman persona.

As this commander of the cobblestone walkway carried on, she continued to strike more poses and, humorously, got duped by the song’s crash ending, unsure of exactly it was supposed to conclude.

“She was amazing and we couldn’t believe the moves that she was coming away with. We were all shouting from the stage, ‘Look at her, she’s awesome!’ She stole the show,” Badboys bassist Billy Kinnear told Team Rock at the time. “As we say in Badboys, ‘You’re as old as you rock’ – and boy, can she rock! With moves like that, she must have been a rocker back in the day. We’d love to know the gigs that she’s been to. It was such a great buzz. It made our day and everyone else’s,” he added.

Watch the video clip toward the bottom of the page.

In recent years, rumors have been buzzing of a forthcoming AC/DC album, which is expected to feature both singer Brian Johnson (who had to relinquish his live role in the band in 2016 due to a risk of permanent hearing loss), drummer Phil Rudd (who has experienced a wealth of legal woes) and bassist Cliff Williams (who retired from the group in 2016). Angus Young‘s nephew Stevie Young is also expected to retain his spot on rhythm guitar.

Twisted Sister legend Dee Snider recently told ABC News Radio that AC/DC’s new record “has been recorded” but “has been delayed” due to the coronavirus pandemic. “I haven’t heard anything,” added Snider, “but…it’s AC/DC, man. You can’t go wrong!…Four chords and a dream, baby! That’s it!”

The singer went on, “This is gonna be a miracle of technology. What will be achieved, the reuniting of the band that we know for one more album, is gonna to be uplifting and heartbreaking at the same time. Because nothing goes on forever. But this is the ultimate ‘one more time.'”

Elderly Woman Dances to AC/DC Cover Band in the Street