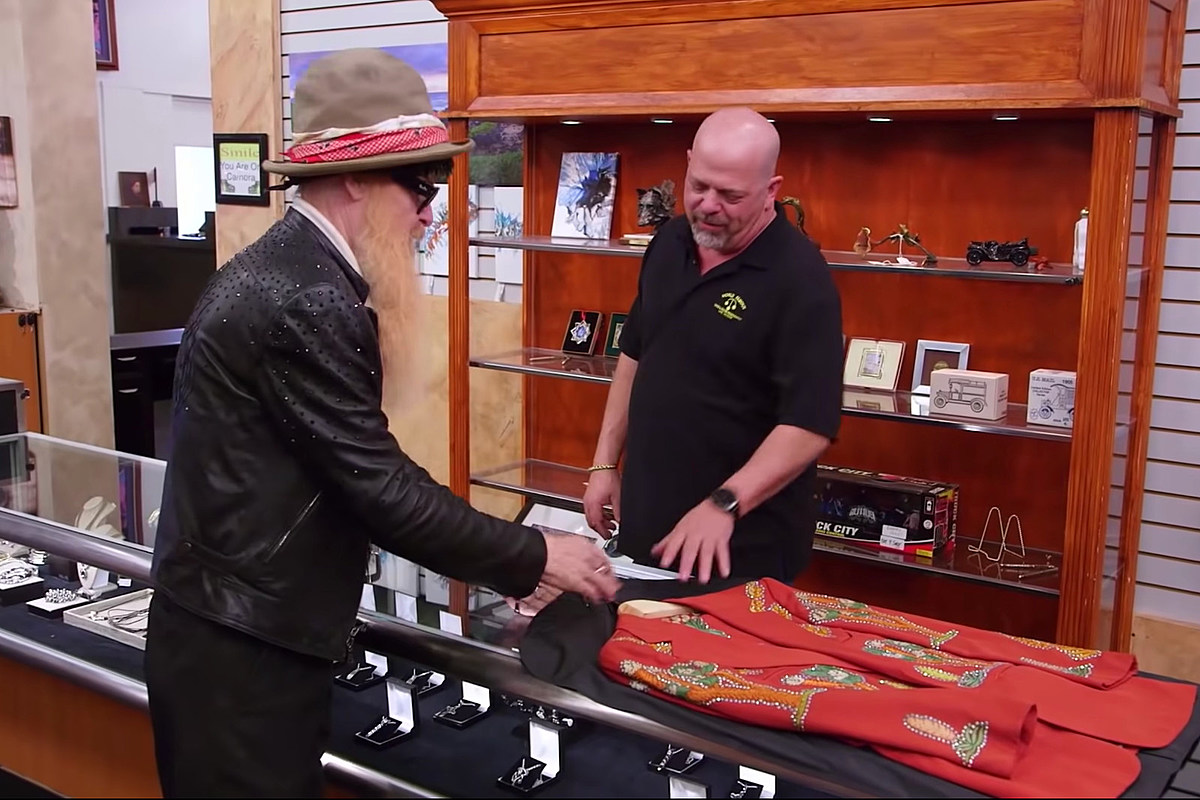 You can watch the clip below.

The segment opens with a customer walking into Las Vegas’ Gold & Silver Pawn Shop with the sharp-looking garments, which Gibbons supposedly once owned. “The rhinestones are in pristine condition,” she says, noting her asking price of $25,000. “There’s not a single one missing, not a single stain. So I think that this suit is the real deal.”

Owner Rick Harrison examines the red jacket and pants, offering a quick history lesson on the brand, Hollywood’s Nudie’s Rodeo Tailors, and its status among ’70s country and rock artists.

“Over the years, they got more and more and more flamboyant, so every rock star was buying them,” he says. “If you were in that industry back then, you were nothing unless you had a Nudie suit.”

“I know a guy who will know all about this,” Harrison notes, using a go-to line. But this time, his expert turns out to be Gibbons himself, who surprises the customer by authenticating the suit and detailing its intriguing backstory. “The Nudie suit has kind of come into its own over the years,” the songwriter says. “We became clients with Nudie in 1972. Those suits appear on the cover of ZZ Top’s Fandango! record. So we’ve had a long history with the shining rhinestone suits. It’s pretty fun.”

Noting that the experience “brings back a lot of memories,” he says he hasn’t seen the clothes since 1974. “I inadvertently misplaced it, left it on an airplane,” he admits. “By the time I realized it was MIA, I called the airline, and the cleaning crew had gone in, so I completely thought this had vaporized. … It still looks like it might fit.”

Gibbons also elevates the asking price, noting, “It might be your very lucky day. [With] a garment of this rarity and at this quality, it’s not surprising to see a real, genuine Nudie go [for] as much as $50,000.”

He and Harrison agree to pay $20,000 apiece, with the goal of donating the suit to “Antone’s blues museum” in Austin.

Gibbons has a long history with the Antone’s venue, having hosted an all-star New Year’s Eve “Jungle Show” concert at the venue for the past several years. The sixth-annual event – which also featured Jimmie Vaughan, Mike Flanigin, Sue Foley and Chris Layton – was livestreamed a couple weeks ago due to the COVID-19 pandemic.